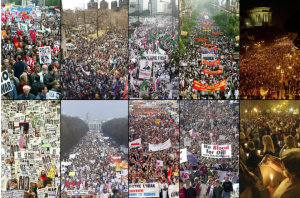 So much of Vijay Prashad’s writings, especially on the issue of Syria, sound like US State Department analyses. It’s a very identifiable approach taught in international studies departments around the world that focuses on power politics to the neglect of popular social movements. This approach has misled Prashad so badly in Syria that he’s disgraced himself by supporting Russian & Syrian bombing of civilian populations so Assad can take out Al-Qaeda even though he correctly opposes US intervention.

Now In These Times has published a discussion between Phyllis Bennis, Ali Issa, & Prashad on the future of the antiwar movement titled “The US Is Bombing at Least Six Countries. How Can the Anti-War Movement Step Up?” This is the central question in international politics today & a thoroughgoing analysis is long overdue. Unfortunately, none of these elaborates the causes for the decline in the movement nor the way out of its present malaise so much as they reflect the problems, which are not specific to the US. The sectarianism, provincialism, inability & even unwillingness to organize the grassroots which characterize the US movement is an international problem. The primary problem is the left’s support for the Assad dictatorship, for Russian & Syrian bombing of civilians, & the denial of the popular revolution against Assad. This has led forces within the US movement to proclaim they don’t oppose Russian & other foreign intervention in Syria because only US intervention should concern US activists. Separating US intervention from the other counter-revolutionary forces & claiming the US is on a regime-change mission is how they justify supporting counter-revolution in Syria.

In his contribution, Prashad laid out a litany of six “core issues” that “there ought to be agreement on” among the left which could rejuvenate the antiwar movement. Pardon me for pointing out the obvious, but a broad-based social movement does not have a body of doctrine to which all must subscribe. One of his proposed six demands was “reduction of the military budget.” Call me unreasonable, but I don’t agree with his call for a reduction in the military budget. My proposal is for its complete elimination, including dismantling all US bases, the Pentagon, & the CIA. But I don’t require anyone to agree with me & would be proud to march against war with those who agree with Prashad. There cannot be any political conditions laid down for participation in the antiwar movement except opposition to wars by whichever governments are involved.

Leftists should not control the politics of the antiwar movement. In the past, thousands of activists from liberals to socialists have come together to democratically hammer out the program & methods of the movement & to build a movement where all opposed to war, for whatever reasons, may participate. That’s what is needed now. That is not lowest common denominator politics. All those whose families & lives are affected by wars should have a say in how to build the largest movements to oppose them.

Photo montage is 2003 protests against Iraq War which took place in 60 countries with estimates up to 30 million people participating.

(Photo montage from The Atlantic)