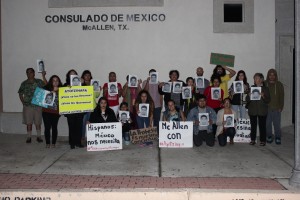 Tens of thousands continue protests across Mexico demanding the government find the 43 student teachers disappeared on September 26th. They chanted: “They took them away alive & alive we want them back.” In Chilpancingo, the capital of Guerrero state where the students disappeared, protestors blocked all three highways leading into the city for several hours. Protestors elsewhere plan to “seize” toll booths on federal highways. Classes were suspended at universities across Mexico including 52 campuses in & around Mexico City. This is only the first of three days of planned protests.

Yesterday federal cops arrested the fugitive mayor of Iguala (where the assault & kidnapping took place) and his wife who have long been suspected of ties to organized crime & are now accused of ordering the hit on the students. Of course the drug-associated corruption doesn’t stop there but goes all the way to the top where pretty-boy president Enrique Peña Nieto presides over what is quickly becoming a narco-state & a model of neoliberal catastrophe.

The US is up to its eyeballs in bankrolling & providing logistic support to the Mexican military–which has killed over 60,000 civilians & disappeared over 26,000 people in the past 8 years under the guise of the war on drug trafficking. We don’t know if those figures include the thousands of undocumented immigrants from Central America murdered & disappeared. The Mexican regime can’t explain why in the same period drug production & trafficking has increased substantially. Marijuana production alone is reportedly up 35% since the beginning of this travesty.

Because the US is so involved in Mexico, it is important for people here to rally in solidarity with the disappeared & beleaguered students & teachers who are in the leadership of this struggle.This photo is a solidarity rally held today at the Mexican Consulate in McAllen, Texas on the border with Mexico. Once again, honor was paid to the disappeared by holding up their photos & lighting candles for each one.