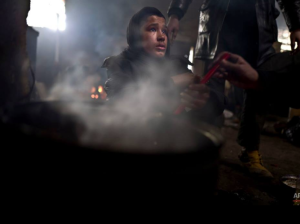 While the US government cavalierly plans out an escalation of the murderous war in Afghanistan, we should remind ourselves that the European Union does not consider Afghans to be war refugees & denies them asylum. Afghanistan is not included in the Muslim ban under Trump but under Obama, the US had only accepted about 97,000 Afghans. There are nearly 3 million Afghan refugees, most in Pakistan & Iran, with 1.5 million internally displaced within Afghanistan living homeless or in squalid makeshift camps.

This is 12-year-old Liaqat, an unaccompanied child refugee from Khogyani, Afghanistan, living with other refugees in a dilapidated, abandoned warehouse in Belgrade, Serbia where they spent the winter, unable to move forward to asylum within Europe.

No to US war in Afghanistan. Out now!