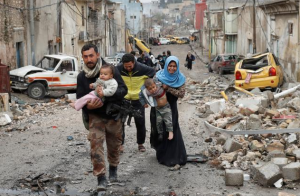 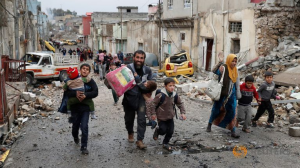 What the US coalition & Iraqi forces are doing in Mosul is the same scale of barbarism & criminality as Syrian, Russian, & Iranian forces in Aleppo.

Massive bombing of residential areas, entire families buried in rubble & terrifying reports of children shouting from beneath the rubble for someone to help them. Tens of thousands dodging crossfire & rockets in flight for their lives; Iraqi special forces making door to door home invasions searching for ISIS snipers; Iraqi forces detaining fleeing men & boys as potential ISIS fighters trying to escape. This is the character of liberation US-style.

If we learn nothing else from this method of fighting ISIS, it is that bombing cities with millions of people to take out a few thousand urban guerrilla fighters is not only a monstrous strategy but it is a completely dishonest one. The intention both in Aleppo & every other Syrian city being bombed & in Mosul in Iraq is to bring the civilian population to its knees in subordination.

There is no more tragic nor epic failure than the complete lack of an international antiwar response to defend the Syrian revolution & the Iraqi people from US occupation. It is the epic mission of our generation to forge a new antiwar movement, uncompromised by association with Assadism, Islamophobia, anti-Semitism & committed to the immediate, unconditional withdrawal of all foreign troops & military operations in Syria, Iraq, Afghanistan, Libya, Somalia, Yemen.

These are photos of civilians fleeing Mosul on March 4th as bombers turn the city into mountains of rubble.

US out of Iraq & Syria now!