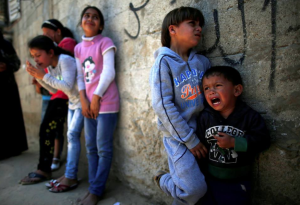 The UN Human Rights Council voted today to send a team of international war crimes investigators to examine the sniper shooting of thousands of unarmed protesters in Gaza. Of course this is a good thing. But it’s part of a vicious dead-end cycle of genocide, UN & other human rights investigations, & ritual condemnations that go nowhere. It’s been 70 years of this charade. It isn’t that the UN & its member states don’t know exactly what is going on in occupied Palestine. In this day & age, if they don’t trust photojournalism, Palestinian accounts, or the number of dead & injured Palestinians, there’s satellite imagery for documentation. In the age of satellites, no one can claim stupid.

It’s true that there have been a few Democrats in the US who’ve expressed squeamishness over the level of Israeli violence against unarmed Palestinians. There’ve been a few governments like South Africa, Turkey, Canada, & Belgium who expressed “concern.” But their squeamishness & concern will go nowhere without a massive popular & coordinated international movement forcing them to sanction Israel in the harshest ways, but mostly by cutting all military & other aid.

It may be time for activists around the world to take initiatives to organize & formalize structures of international collaboration. The freedom struggles of Palestinians, Kashmiris, Rohingyas, & others are so important & politically epic for the future of all humanity that they cannot be left to chance or to hopes that activists will organize support rallies & activities. Such a collaboration is organizationally & politically daunting but imperative so as not to fritter away the massive phalanxes of solidarity already assembled. Such collaboration would be a way for Palestinian, Kashmiri, Rohingya, & others to collaborate, to strengthen each other & for efforts of supporters to be maximized. One thing we know after watching the UN in action (more aptly, inaction) is that it cannot be trusted to do the work of solidarity. That is entirely our mission.

(Photo of grieving children in Gaza from Al Jazeera)