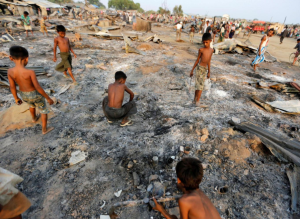 The UN Human Rights Council passed a resolution to send a team to Arakan state in Myanmar to investigate charges that the Burmese military are engaged in killing, raping, torturing, & torching the homes of Rohingya Muslims on a mass scale.

A spokesperson for Aung San Suu Kyi said the regime “cannot accept” that resolution. The Kofi Annan commission which turned in its whitewash findings last week recommended that the Suu Kyi regime allow human rights monitors & journalists unfettered access to Arakan state. Suu Kyi’s office issued a statement of concurrence with the Annan report, relieved that he provided cover for the genocide she was orchestrating.

That concurrence means it won’t be so easy for her to refuse entry to the UN Human Rights Council investigative body. But of course, she will come up with some justification for doing just that.

There are 75,000 Rohingya who fled Arakan state since the onslaught began last October 9th. That’s a lot of witness testimony the UN body can get without ever setting foot in Arakan. But they should continue to pressure Suu Kyi who has now completely lost her hallowed status as a champion of human rights & is now recognized as a two-bit political hustler for the military junta which really rules the country.

Media should stop referring to the genocidal onslaught against Rohingya which began last October as a “counterinsurgency operation,” which suggests Rohingya militias had culpability for the genocide when there’s no evidence for that but only Islamophobic accusations.

(Photo of Arakan state from Reuters)