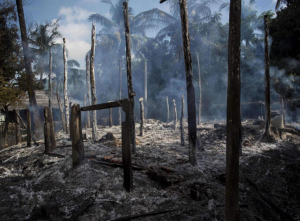 UN human rights chief Zeid Ra’ad Al Hussein reported Friday that his agency receives daily reports of rapes, murders, torching of homes, & other human rights crimes against Rohingya Muslims in Myanmar but that the UN could not verify the accounts first hand because the regime of Suu Kyi has barred independent monitors from investigating.

Hussein called Myanmar’s response to allegations “short-sighted, counterproductive, even callous.” Denunciations for alleged genocide don’t get tougher or more righteous than that. How can the Suu Kyi regime ever bounce back from such an indictment?

It could just as well be said that the UN’s response to allegations of genocide is callous, not to mention criminal. It’s the old playing stupid routine. Just how much documentation does the UN need to speak with unequivocal condemnation? It didn’t have any hesitation in the same statement denouncing the killing of border guards last October which the Suu Kyi regime used to go on the military assault against Rohingya–even though they still don’t know who the perpetrators were.

In 2012, over 150,000 Rohingya were internally displaced in Myanmar & forced into concentration camps; an estimated 86,000 fled to neighboring countries. In the first five months of 2015, 25,000 fled by boat & there is still only an accounting of less than 5,000. Just since October 9th, 27,000 Rohingya fled Arakan state to Bangladesh refugee camps.

Human Rights Watch has published high-definition satellite photos of Rohingya villages torched to the ground by Myanmar ground & air forces during this current siege. Certainly if the UN is denied access to Arakan state it can commission satellite surveillance equipment since the UN has its own military force.

UN officials interviewed 1,000 recent traumatized refugees to Bangladesh who reported the rapes, murders, torching of entire villages. That’s about as first hand as you get. The UN could even go to Rohingya media or social media where Rohingya human rights activists have posted videos & photos of the genocidal siege all over the place. Is the UN going to draw from the handbook of Assadists & claim they’re all staged propaganda to discredit the Suu Kyi regime?

What information will the UN agency get in Arakan state that it hasn’t already gotten from refugees? After all, Kofi Annan visited there twice & claimed he didn’t see a shred of evidence for persecution, let alone genocide.

What about the report a few days ago from the Myanmar Ministry of Cultural & Religious Affairs that they’re writing a history of the country that will omit the very existence of Rohingya to prove they were never indigenous? What about Suu Kyi’s request that the name Rohingya not be used by US or other diplomats?

The UN should stop disgracing itself with half-assed whimpers of protest & condemn the systematic ethnic cleansing of Rohingya Muslims by the military junta fronted by Suu Kyi & her phony human rights credentials.

This photo from October 2016 is smoldering debris of houses torched by Myanmar troops.