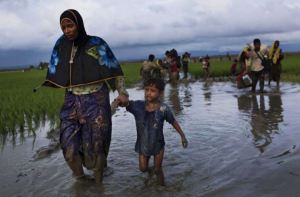 There are two false narratives about the Rohingya that we need to drop like hot potatoes:

(1st) that Aung San Suu Kyi has been silent whilst the military conducts genocide. On the contrary, she has been voluble as all get-out diplomatically & in public interviews & speeches for about five years ridiculing, denying, scoffing at allegations of genocide.

(2nd) that the Burmese military was provoked into this current genocidal onslaught when Rohingya terrorists attacked police posts on August 25th. In fact, the military had hardly cleared out since the last onslaught which started in October 2016 ended after nearly four months. This is an allegation by the Burmese government & by no means proven since nothing they report can be believed. Other reports claim the military was preparing for this onslaught by moving troops into the area & by arming, training, & inciting Buddhist nationalists.
(Photo of refugees by Bernat Armangue/AP)