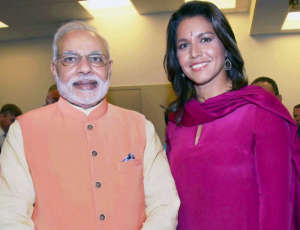 Just several days after the Trump embassy massacre in Gaza, British Assadists, including professional propagandist Beeley, gathered in a pup tent (no other venue would have them) in Leeds, England to hold a mock trial for media lies about Syria. In their powerpoint presentations, Tulsi Gabbard, a Democratic congresswoman from Hawaii, was held up as a truth-teller. They claim that because she shares their extreme Islamophobia & support for Assad’s dictatorship. Gabbard’s truths are rooted in Hindutva nationalism & Zionism. Gabbard is a steadfast supporter of Israel against Palestinians which does not deter Assadists, who claim they are anti-Zionist, from supporting her. That is of a piece with her support for Assad, Modi, General Sisi of Egypt & it is of a piece with their generally reactionary, even fascist politics. She actually traveled to Syria & met with Assad under the auspices of the Syrian Social Nationalist Party, an outright fascist group. She is supported in the US by the Hindu American Foundation, a Hindutva group that believes Hindus are persecuted in Kashmir. So when she visited Modi in India, she spoke at a BJP fundraiser about the persecution of Hindus which in India dovetails with her rabid hatred for Muslims. David Duke, an American fascist, is among her most ardent supporters.