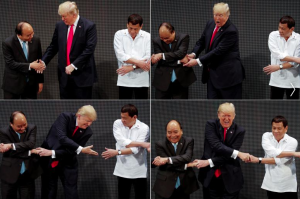 It’s just so wrong making fun of people but when an amoral scoundrel thinks he’s a superior species above the law he makes himself an irresistible target of ridicule. Trump couldn’t do the Hokey Pokey mastered by most kindergarten kids & we don’t care that he can’t master this simple ASEAN bonding ritual. But he runs the US government & has emboldened the most reactionary forces to come out from under their rocks.

Libertarians skulking coyly toward the politics of Fox News refuse to denounce or protest Trump saying he is just a symptom of capitalism & not the problem. He is in fact the problem because he has made racism, misogyny, ridicule of those with disabilities, Islamophobia, anti-immigration politics & other social hatreds acceptable & emboldened the adherents to action.

Until he’s thrown out on his ass or prosecuted, ridicule is as good a method as any to cope with his tenure. With him in power it’s too hard to distinguish his derangement & amorality from the usual predations of US foreign & domestic policy. Or is this what neoliberalism, the barbaric phase of capitalism, has come to?