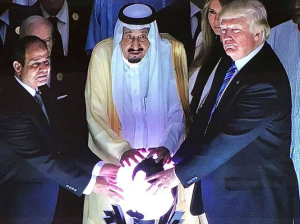 Trump’s diplomatic style is best described as “stepping into it.” That & the curtsey.

As for that magic orb thing: already libertarians are talking about a seance with Lucifer & the Illuminati which should stand Trump in good stead with the pope. It was actually a ritual to open a gigantic electronic surveillance center in Saudi Arabia which does not stand the assembled misleaders at that summit in good stead with the aspirations of ‘their peoples.’