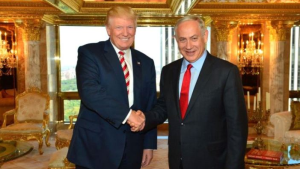 Would those railing about the demonization of Trump like to parse what Netanyahu called the “remarkable alliance between Israel & the US” in the affable exchange between Trump & Netanyahu today? Affable exchange, except in their vituperations against “radical Islam” & in Netanyahu’s vilification of Palestinians as terrorists. Both talked about the “tremendous hate” Palestinians are taught from a very young age.

Can Trump supporters explain the “alternative facts” that make criticism of his Muslim-hating, specifically his hatred of Palestinians, into demonization? Because if you can’t, you ought to take down the posts waving the Palestinian flag. You can’t play both sides of the street when it comes to apartheid.