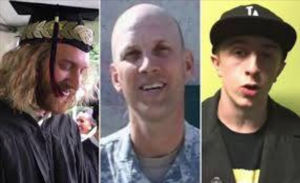 We should take a moment to honor the two men who lost their lives last Friday on a train in Portland, Oregon when they came to the rescue of two teenage girls, one Black & one wearing a hijab, being attacked by a rabid anti-Muslim & white supremacist hater. Ricky Best, a 53-year-old army veteran & city worker left a widow & four young children. Taliesin Myrddin Namkai-Meche, a 23-year-old recent graduate from Reed College, was lauded by his friends & family as modest, thoughtful, & compassionate.

We should also honor Micah Fletcher, a 21-year-old poet who came to the rescue of the young girls. He is now home from the hospital recovering from injuries. All three men were stabbed in the neck.

Misanthropy is not an appropriate response to the rising Islamophobia incited by the Trump regime. It is the refuge of the elitist & cynic. Tens of thousands protested all over the US to oppose the Muslim ban, indifferent to the cynics & elitists who mocked them as mere liberals. Ricky, Taliesin, & Micah are the America most of us know; not the America of Jeremy Christian, the white supremacist assailant.

The Portland Muslim community has raised nearly a million dollars for the families of the three men & for the young girls who will require counseling to deal with the trauma of the assault–not just being attacked but witnessing the attacks on the three rescuers & murders of two of them. There are 14 mosques in Portland who are working together to raise funds & who organized a vigil for the murdered men.

These photos left to right are Taliesin, Ricky, & Micah. May Taliesin & Ricky Rest In Peace. Speedy recovery to Micah.