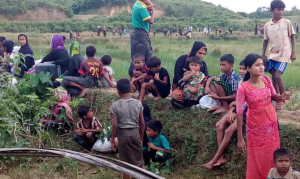 According to a Bangladesh newspaper, there are 3,000 Rohingya on the Myanmar banks of the Naf river dividing Myanmar from Bangladesh trying to get across the river since it is the route taken to flee from military onslaughts. A Bangladesh border guard official estimated there are at least 1,000 Rohingya in the Naf attempting to swim to asylum. There is no report of search & rescue operations for those in the water since Bangladeshi border guards are under orders to turn Rohingya refugees away. That has been policy since at least 2012.

Despite that policy, since October 2016, 87,000 Rohingya have fled to Bangladesh for their lives. This is a humanitarian crisis of gigantic proportions & part of the crisis is the lack of international support to the Rohingya people.

We stand in full solidarity with the Rohingya struggle against genocide & for human, democratic, civil, & refugee rights.