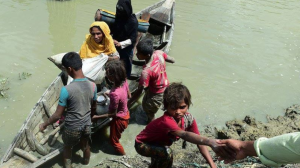 “There’s only one conclusion on the Rohingya in Myanmar: It’s genocide.”

Believe it or not, that is a headline in CNN news today. That was the conclusion of the panel of judges & genocide scholars at the International People’s Tribunal on Burma’s Crimes Against Humanity last September at the University of Malaya-Kuala Lumpur in Malaysia. But the head of the UNHCR, the UN General Secretary, Human Rights Watch, & other such authorities insist it be called ethnic cleansing. This isn’t just a quibbling over terms. Designating it as genocide would put political pressure on governments to do more to sanction Burma than the nothing they have done beyond shaking the naughty finger. It points out the chicaneries in international politics because the methods of ethnic cleansing do not differ from genocide.

(Photo of Rohingya refugees disembarking in Bangladesh from Twitter)