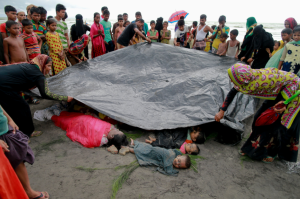 There can be no concessions made to the notion that what is going on in Arakan state is communal violence between Buddhists & Muslims. It is a genocide orchestrated by the Burmese military which exploits the strategy of divide & conquer & organizes & incites Buddhist nationalists to attack Rohingya.

It is an outrage that media reports atrocities have been committed by both sides. The overwhelming number of Rohingya are unarmed civilians at the mercy of a military & civilian goon squads who are torching, raping, murdering, hunting down Rohingya like animals. If Rohingya attempt to defend themselves by any means possible, that is not atrocities but self-defense.

In this photo, Bangladeshi villagers are covering the bodies of Rohingya women & children who died when the boats they were using to flee genocide capsized.