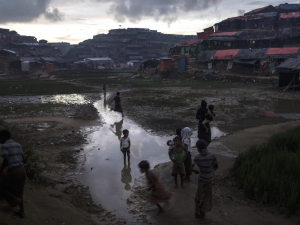 “While it is positive that Myanmar & Bangladesh are discussing options for the safe return of Rohingya to their homes, this must be a voluntary process & not lead to a hasty & reckless effort to push people back against their will. No one should be forced back to a situation where they will continue to face serious human rights violations & systemic discrimination & segregation.”

No offense to the diplomatic efforts of Amnesty, but it is not positive. It is a snow job & no concessions should be made to it. There can be no repatriation schemes worked out between Burma & Bangladesh. There can be no decisions about the fate of Rohingya refugees without their direct & democratic involvement. The issue now is not repatriation. Not until the Burmese army has been forced to withdraw lock, stock, & barrel from Arakan state; not until the generals & Suu Kyi have been prosecuted for crimes against humanity; not until the Buddhist death squads have been apprehended & prosecuted. Not until the Rohingya people are able to ensure their safety & full human, democratic, & civil rights.

The issue now is not repatriation but refugee rights first in Bangladesh where refugees are still starving & being treated like livestock. Rohingya are stateless & have no papers to get asylum in other countries. That is a priority for Amnesty: demanding governments provide asylum with full rights including residency & work papers, housing, access to education, healthcare, social services, & safe passage to get there. This is not the time for pipe dreams but for defense of refugees, many of whom are imprisoned, under threat of deportation, or targets for human traffickers.

(Photo of refugee camp in Bangladesh by Paula Bronstein/Getty Images)