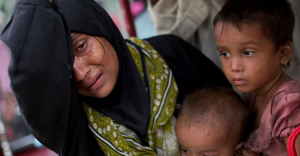 Men & women fleeing from genocide with their children–especially after seeing family members raped, executed, tortured, or burned alive–must endure a special kind of high-adrenalin hell fearing they will not be able to get their children to safety & may witness them brutally killed. This young mother collapsed in exhaustion after arriving with her children in Bangladesh on Tuesday.

All of this is overwhelming to witness but we must face it squarely in the face because it is nothing compared to what the Rohingya endure. Now the world knows what is going on & tens of thousands of people around the world, especially in the Muslim countries, are marching in solidarity with the Rohingya. They have never had this kind of support before. They stood alone against generations of pogroms & then genocide at least since 1942.

We cannot allow the junta, Suu Kyi, or political degenerates to vilify the Rohingya as jihadi terrorists or turn this into some kind of proxy war thing as they did so effectively in Syria. The only way to do that is to honor the voices of Rohingya refugees who testify to genocide & reject all other vile apologetics for the regime or attempts to make this all about pipelines to China. When media or the UN play stupid because they can’t get into Arakan to see the carnage for themselves, we have to insist they respect & hear out the testimony of Rohingya refugees & not reject it as they do.

It’s time to build a movement to demand Burma stop the genocide since there are still hundreds of thousands of Rohingya remaining in Arakan. We have to demand full human, democratic, civil, & refugee rights. We can no longer allow our Rohingya brothers & sisters to stand alone. This cannot be the final stages of genocide but must be the first stages of international solidarity.