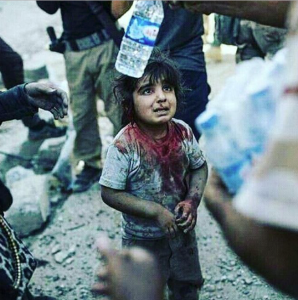 A child caught in the Mosul Apocalypse where the US is “liberating” with white phosphorous.

In reporting about the US use of white phosphorous in Raqqa, Syria, the NY Times suggested the accusations came from ISIS in at attempt to discredit “its enemies.” In fact, the accusations of white phosphorous use in Mosul came from Human Rights Watch & Amnesty International as well as ISIS, & in Raqqa from the Syrian Observatory for Human Rights & the citizen-journalist group Raqqa Is Being Slaughtered Silently which provided video documentation.

Human Rights Watch is still investigating what the distinctive signs of white phosphorous over Raqqa are–although, according to the NY Times, the US military acknowledges it is using white phosphorous “in accordance with the law of armed conflict.” The NY Times, scratching its ass in perplexity, said it’s not been determined whether the white phosphorous shells are landing in “populated areas.” Could they tell us what part of a metropolitan area with 340,000 civilians is not populated?

As for ISIS making such accusations to discredit “its enemies”, we’d like to ask why ISIS would bite the hand that feeds it? Why would ISIS be so ungrateful to the US when, according to a US Department of Defense report, the US has let over $1 billion of military equipment–mortars, assault rifles, humvees & armored vehicles–slip through its fingers to ISIS fighters?

The only principled demand is the immediate, unconditional withdrawal of all US & foreign militaries from Iraq & Syria. The US has no business being there. There is no such thing as “US interests” in the region; only the interests of Syrian & Iraqi working people matter where peace & justice are concerned.

Out now. No War. No Islamophobia.

(Photographer not identified; from Gazeta Monitor via Haseeb Rahman)