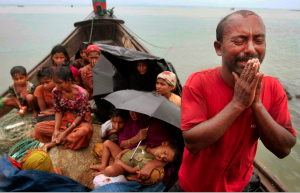 This is an article by me titled “The Unpeople Rohingya: Expose The Duplicity Of Aung San Suu Kyi” which was published May 9th, 2016 in Countercurrents. The editor Binu Mathew told me it reached over 50,000 people.

Because of Suu Kyi’s many international awards as a human rights champion, her role was confused as silence rather than outright collusion & as a human rights facade for ethnic cleansing. Her human rights record is actually wholly fictitious, a construct serving the military junta. She has never had a damn thing to do with human rights.

Even she once made light of her 15 years of house arrest in her mansion on a lake in the swankiest section of Yangon attended by servants. Not quite a gulag like other Burmese dissidents, no torture, persecution, or ethnic cleansing.

At the time I wrote this article, it was becoming clearer internationally who Suu Kyi was politically: an image & no martyr for human rights. Though it was already entirely evident in 2012 when she traveled to pick up her Nobel Peace Prize & other honorifics whilst the military was on siege against Rohingya & she never uttered a peep about it, neither to acknowledge nor condemn.

Her public role denying & mocking the recent siege against Rohingya in Arakan state involving mass rapes, executions & massacres, forced disappearances, torture & beatings, torching of villages, & the flight of 75,000 as refugees to Bangladesh has removed the battered halo & made her an object of scorn. Hopefully, someday she will one day be the subject of prosecution for crimes against humanity.

This iconic photo is a man pleading with Bangladeshi border guards for asylum from the 2012 military siege against Rohingya. Tens of thousands were fleeing for their lives but being refused entry by Bangladesh. The same was happening to Rohingya refugees on boats. The Thai government was not just turning away boats of refugees but tugging them out to sea & abandoning them to certain death.

Rohingya refugees are organizing solidarity groups & networks, using social media to educate & build solidarity, rallying & picketing in countries where they have found asylum. The response to genocide by most governments has been to play dead or rant a little indignation but many governments & their agencies are baiting Rohingya resistance as associated with Middle East “jihadi terrorists.” To this we respond with an international hoot of derision. International solidarity is growing & it won’t be stopped by vilifying.

Je suis Rohingya. Their struggle is our struggle. No human being is alien to us.