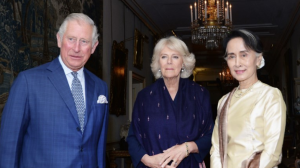 Before the current genocidal onslaught began August 25th in Arakan state, Charles & Camilla were planning on including Burma on a state tour of Asia & India this month. Now they’ll skip Burma but still visit Singapore, Malaysia, & India which is trying to deport Rohingya refugees back to a genocide in Burma which the Indian government is arming. Not that the British moochocracy is the least bit squeamish about genocide. They wrote the book. They were also training the Burmese army, including during the murderous onslaught on Rohingya that lasted from October 2016 through at least January. Now, to remove the malodor of collusion in genocide, the British military has stopped their training program–or so they claim.

This photo at Charles & Camilla’s residence was taken in May 2017 when Suu Kyi visited London. Media reports point out that Charles is a patron of the Michael Aris Memorial Trust for Tibetan & Himalayan Studies named after Suu Kyi’s deceased husband which probably had nothing to do with this meeting & everything to do with British business & military interests in Burma.

This week the Disasters Emergency Committee, a consortium of 13 UK charities, launched a major fundraising campaign for humanitarian aid to Rohingya refugees. The government pledged to match the first £3 million donated by the public. How much of that aid will actually get to the refugees is uncertain. What is certain is that £3 million from the government is chump change compared to British investments in Burma or what the government got for training the Burmese army in the methods of genocide.