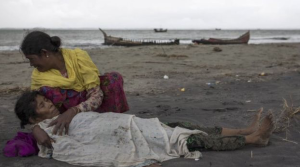 If you know anything about how the Bangladeshi government has been dealing with Rohingya refugees since before the 2012 onslaught in Arakan state, you didn’t swoon or get taken in by the pictures of Bangladeshi Prime Minister Sheikh Hasina hugging Rohingya children or coming on like a Mother Teresa when she visited the refugee camps. She’s a savvy politician who was playing for the cameras.

No one who witnessed the 2012 genocidal onslaught will ever forget the images of Rohingya refugees pleading with Bangladeshi border guards to allow their families to enter only to be turned away. Nor can we ignore the current images of Rohingya who drowned in the Naf river because border guards turned them away. No one will be moved by her maternal exhibition when they consider her proposal less than a year ago to dump thousands of Rohingya on an uninhabitable island subject to monsoons & regular flooding. Who can ignore that she offered to help Burma militarily go after terrorists in Arakan state which would have meant joining Burma in its genocide? Lastly is the matter of Bangladesh obstructing Rohingya from registering with the UNHCR to be eligible for the paltry aid provided by that agency.

Is the Bangladeshi government overwhelmed with 400,000 new Rohingya refugees when it already harbored over 350,000? Absolutely. But it’s making all the wrong choices in how to handle humanitarian aid including food, clean water, medical care, housing. There’s nothing to be gained by comparing Bangladesh’s response to that of the European Union–where believe it or not, Bangladesh comes out the better. The EU is the standard of barbarism when it comes to refugees, putting them in filthy, overcrowded holding pens, forcing them to live outside in subzero temperatures, allowing thousands to drown. Bangladesh could instead make strong demands on other governments to provide aid & to open their borders to asylum for the Rohingya.

This BBC article is actually quite useful in explaining how the Bangladeshi government is obstructing the delivery of humanitarian aid to the new refugees. He pulls his punches in the conclusion but this is the BBC after all. He needs to do some more investigation into the relief organizations blaming the problem all on the Bangladeshi government. We know that after the 2010 earthquake in Haiti, there were over 10,000 NGOs & humanitarian aid groups operating in the country who have almost nothing to show for it, not even port-o-potties when hundreds of thousands were homeless & had to poop in the public streets & fields, creating major health problems.

The horror this journalist presents is that after nearly three weeks there is almost no humanitarian aid being provided to Rohingya refugees who are still sleeping outside.