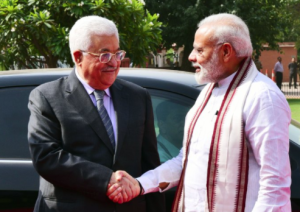 There’s always someone who takes umbrage at my criticisms of Mahmoud Abbas by claiming erroneously that he is the elected leader of the Palestinians. Would you make the same case for Trump, Modi, Putin, Assad, Duterte, & other such rats who were “elected” in mostly fraudulent elections? But it wouldn’t matter if Abbas were elected because he is the enforcer of the Oslo Accords, a US-brokered peace plan which legalized the continued occupation & expropriation of the West Bank, East Jerusalem, & Gaza. Do you want to argue the Accords were legitimate because Yasser Arafat signed them when the past 23 years of their existence show them to be a betrayal, whether Arafat understood that or not? Just take a look at the plan, as Edward Said & others did when it was brokered, & you will agree with them that it embodies the terms of Palestinian surrender to colonialism. The US would be unwilling to broker any other kind of arrangement.

Abbas also has to answer for his treachery in holding diplomatic tete-a-tetes with Modi while Kashmiris are suffering Indian military occupation. Any Palestinian stone pelter would stand steadfast with Kashmiris rather than betray their just struggle like Abbas the rat. But then the stone pelters represent a very different class than Mahmoud Abbas. Mahmoud Abbas is to Palestinians as Omar Abdullah is to Kashmiris.

(Photo is Abbas with Modi)