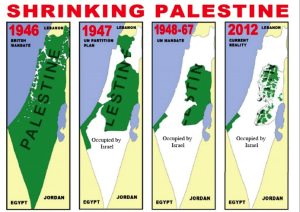 The silencing of Arab voices, specifically Syrian voices, in deference to white hired propagandists also silences the voices of Palestinian refugees in Syria. Their refugee camps have been bombed, they are locked out of Jordan, treated shabbily in Lebanon, vilified as terrorists elsewhere. We don’t know what has happened to most of those refugees. They were already locked out of Palestinian political life by the Oslo Accords which legitimized occupation & expropriation. As Israel continues to take Palestine, there is obviously no place for refugees to return & it is reported that Syria has developed plans for Yarmouk & other refugee camps once they are cleared of Palestinians. That makes the demands of the Great Return March monumentally important.

Refugee rights, as the Great Return March posited, is a central issue of Palestinian justice.