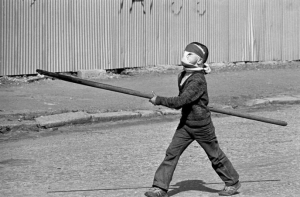 Reposting this from 2013 to show the role of small children in the British military occupation of Northern Ireland. It was my first experience with military occupation when I visited Belfast & Derry in 1981 & I found it terrifying, including being frisked down by soldiers, watching the constant caravans of armored vehicles with rifles on turrets pointed at pedestrians & on one instance with British rifles pointed at me when I tried to take photos.

There’s nothing so ardent as the indignation of children. This small boy in Belfast prepares to take on the British army with a home-made lance in 1981.

I visited Belfast (& Derry) at that time & asked a group of small boys in Belfast to show me the murals painted on walls in the Catholic neighborhoods to support the hunger strikers. The murals were extraordinary but as the 8 to 10 year olds guided me through the streets they would stop to lob rocks at constantly passing caravans of British armored vehicles. I, being no coward (at least all of the time) stayed with the boys though I was scared silly. Their bravado may have been partially to impress me–& that sure worked–but it was also heartfelt. When I parted with the group at the end of the day I asked them if they would like me to send them copies of the photos I had taken. “No,” said one young boy. “Use them to show people what is really going on here.”