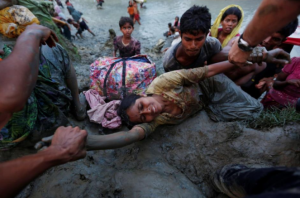 A Rohingya woman being rescued coming out of Naf river which borders Burma & Bangladesh:

The Rohingya genocide is not likely to be discussed at the ASEAN (Association of South East Asian Nations) meeting being hosted by Philippine president Duterte. If human rights were a concern of the organization, the summit would not be held under the auspices of Duterte while he is engaged in a death squad war against the poor & conducting war against Muslims. ASEAN in the past has supported the Burmese junta & all of the member countries have significant human rights issues to account for so the agenda will likely entail primarily military & economic concerns.