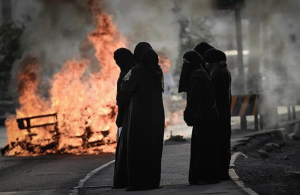 Say what you like about the burqa (don’t say it here; enough already) but it’s an attire made for revolution & the women of Yemen & Bahrain have maximized the possibilities.

In this photo from 2013, Bahraini women are burning tires as barriers against the riot police who’ve been trained by supercops from the UK & US in the use of pellet munitions & other barbaric crowd control methods. The women are protesting in a village near Manama against the imprisonment of thousands of political activists.

There are many photos of Bahraini women engaged in political activities indistinguishable from their kids. When they run from police, catch ’em if you can. Try to identify which one is the arsonist who set the tires aflame.

No disrespect intended, but the burqa should be adapted by protesters across the globe.

Something else might be mentioned: Assadists always support Assad’s regime by referring to its secular character, by which they mean he’s too western, too haute couture, too repressive of the Muslim veil to be a monstrous dictator. That exposes their counter-revolutionary loyalties since in both Bahrain & Yemen veiled women led those revolutions & in Egypt they played a significant role. Let it be said again: revolution is a come-as-you-are affair.

The women of Bahrain are the standard bearers of women’s liberation & revolution against dictatorship & we stand with them no matter what the hell they wear.