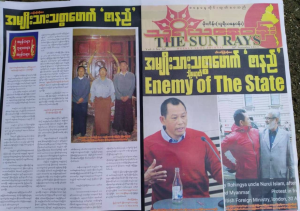 Maung Zarni is a Buddhist Burmese dissident in exile who is playing a singular role, respected by Rohingya activists, in speaking out against the Rohingya genocide. It’s repugnant & profoundly racist to dismiss the voices of Rohingya, including 400,000 refugees, but it isn’t so easy to write off a Burmese Buddhist who also has academic & activist credentials.

Media are apparently not asking Rohingya spokespersons to appear in interviews but they are asking Dr. Zarni & he is not pulling his punches in any way about the character of this genocide. But this matter of silencing the cogent voices of Rohingya is quite consequential & as solidarity activists we need to make sure we don’t fall into such a shameful trap. That makes the testimony of Dr. Zarni very important. Rohingya activists & Dr. Zarni will be testifying at the International People’s Tribunal on Burma’s Crimes Against Humanity in Kuala Lumpur starting on Monday.

Irrawaddy News which was formed by 1988 generation activists in exile has become a rancid & racist voice defending the genocide. In this photo, they label Dr. Zarni an “enemy of the state.” He’s the man in the red jersey on the right under that designation, which he proudly admits to being.