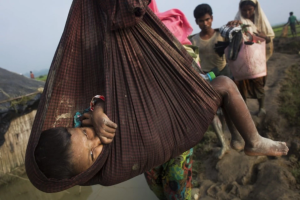 In the midst of genocide, things look very grim indeed because the scope of so much human suffering is overwhelming. But bear in mind that during the 2012 genocidal siege in Arakan when tens of thousands of Rohingya were fleeing, they pleaded for their lives as they were turned away by Bangladesh; Thailand took their rickety boats out to sea & abandoned them. Aung San Suu Kyi gave a stirring speech about human rights when she picked up her Nobel Peace Prize & traveled to several countries to be feted with other human rights awards without ever being asked about the genocide back home. There wasn’t a single protest anywhere in the world in their defense & as a matter of fact, most of us had never heard of the Rohingya.

There is a long, long way to go but the phalanxes of international solidarity are assembling. When people ask “where are the Muslim countries?” the answer is “today, despite their government’s indifference & even opposition, Muslims around the world are out in the streets by the thousands in solidarity with the Rohingya people.”

Here a Rohingya child crosses the border with his family. He may grow up to be part of the freedom struggle. He may possibly come of age in a time when Rohingya Muslims have achieved their freedom because they are no longer alone in their struggle for justice.

Stand with the Rohingya people against genocide.