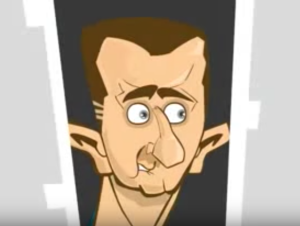 During an interview last year, Assad said he lost no sleep over the deaths of 400,000 Syrians or the situation of millions of Syrian refugees. When pushed about the deaths of children killed in Aleppo he laughed off the question. Shades of Madeleine Albright, another psycho killer who brushed off the deaths of 500,000 Iraqi kids as “worth it” to accomplish US policy goals in Iraq, the fruits of which are ISIS.

Now it’s being gossiped by Russian insiders that the mental health of Assad is on shaky ground. They’re insinuating & spreading rumors that he’s “exhausted” from the psychological pressures & tensions of carpet bombing civilians for almost six years. They say he’s even developing a nervous tick in his left eye as a result.

“Exhaustion” of course does not mean Assad suffers any remorse at the horror or scale of his crimes but only that mass murder has kept him from more pleasurable pursuits. That tick could just as well come from keeping one eye open all night lest he be murdered in his sleep. A dictator can never be too careful.

Whatever the cause, the tick won’t be an aesthetic problem. It’ll go well with the twisted sneer & his likeness to a predatory bird & it will all still shake out haute couture in Armani. Actually it won’t be a problem at all since you can’t tell a photo from a caricature of Assad.

The tick won’t be a political problem either as long as the checks keep going out to Beeley & Bartlett & the even smarmier vicar from England who hopes to set up a congregation in Syria after they’ve driven all the Muslims out.

The Russian insiders didn’t express much sympathy for Assad. He doesn’t appear to be particularly endearing even to his closest allies. He’s probably a pretty lonely guy. Mass murderers usually are.

If all goes well that nervous tick will be connected by the vagus nerve to some internal organ that’s ready to croak from exhaustion & they can just bury the sucker.