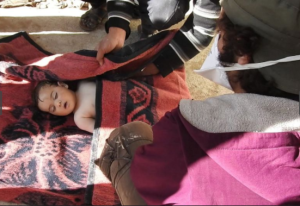 The monstrous chemical gas attack by Syrian bombers on civilians in Khan Sheikhoun, Syria has finally got the Assadists denouncing US war crimes in Mosul. Bait & switch is a sleazy legal maneuver but to use it to cover for a gas attack on civilians exposes them for the counter-revolutionary dirt-balls they are.

This is one of the babies who was killed in that gas attack. There is no dirty trick strong enough to cover for this & any attempt to do so marks one as the criminal defense of dictatorship & savagery.

Trump as candidate said a thousand times “Syria is not our problem.” His “our” here refers to the US government. The US Pentagon is in Syria up to its eyeballs with bombers, the CIA, special forces, mercenaries, & ground troops & has been for a long time as part of the counter-revolutionary force to pummel the revolution against Assad. Syria & Iraq are of a piece with US strategic goals in the Middle East & to principled antiwar activists Syria & Iraq are both our problems. We stand steadfast against Syrian, Russian, US bombing of civilians.

Many erstwhile US socialists & antiwar activists have gone over to the dark side to support Russian intervention in Syria & endorse Assad’s bombing of civilians to protect national sovereignty. They claim the US intervenes for regime change. They can only arrive at that deranged view by denying the revolution against Assad’s dictatorship. If they have an ounce of political coherence & integrity left, they should answer if they support Assad’s gassing of civilians. Or will they also change the subject to Mosul when they’ve been silent about Mosul for months?