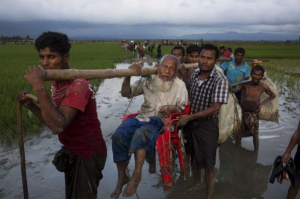 Associated Press published a poignant & powerful album by photojournalist Bernat Armangue of Rohingya refugees crossing through rice fields into Bangladesh. On each of them AP posted this caption which pushes the limits of how many lies you can pack into two sentences:

“Myanmar’s military says almost 400 people have died in recent violence in the western state of Rakhine triggered by attacks on security forces by insurgents from the Rohingya. Advocates for the Rohingya, an oppressed Muslim minority in overwhelmingly Buddhist Myanmar, say hundreds of Rohingya civilians have been killed by security forces.”

The photos, all with the same caption, have appeared in many media sources pushing the line promoted by the military junta & Suu Kyi regime that jihadi insurgents are responsible for inciting the violence. There is no real evidence for the alleged attacks–allegations by the junta do not constitute evidence–let alone for the actual existence of ARSA outside of videos on YouTube that are only a few months old. This genocide was planned & militarily prepared to exact maximum harm on the Rohingya people. It is a mockery of journalism to cite the death toll of 400 given by the military engaged in genocide rather than interview refugees who witnessed people executed in the most barbarous ways.

The only reason media is creating such a dishonest narrative is to protect the billions & billions of dollars invested by dozens of countries in Burma. By misrepresenting the Rohingya as jihadis they can drag in the Islamophobia crap, justify the genocide as communal violence, & prevent human rights activists from demanding sanctions be placed on the Burmese junta.

Stand in solidarity with the Rohingya people in their struggle against genocide & for human, democratic, civil, & refugee rights.