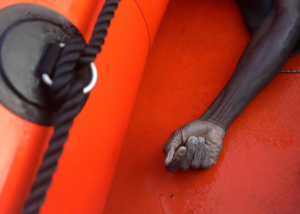 This is the disembodied arm of a refugee who drowned this week in the Mediterranean just off the Libyan coast. His body was retrieved by the private rescue group named Proactiva Open Arms. Ironic that.

We aren’t told how many other bodies were retrieved in this rescue operation. Was this the one last Wednesday where 146 refugees drowned & the only survivor was a 16-year-old boy whose life will be forever changed? Or was this another mass drowning?

It happens so often it probably doesn’t seem important for media to report. It probably seems wiser not to discomfort us by telling us just how many are drowning: almost a thousand so far this year, in just three months. But that figure is just an estimate anyway. No one’s really counting how many dinghies & boats leave Libya or how many are crammed into each boat. They’re only poor people after all. It’s not like they’re human beings.

We are not discomforted. We are outraged that human life is treated with contempt & human death is treated in a disembodied way to hide reality from us. There are tens of thousands of refugees massed on the borders of Europe, northern Africa, & the US living through harsh winters & inclement weather because of barbaric immigration practices which governments are whipping up racism, Islamophobia, “jihadi-phobia,” & xenophobia to justify.

The mantra of immigration rights is no human being is alien to us, no human being is illegal. They are all one of ours. Open the damn borders. Immigration is a human right. Asylum for refugees is mandated by 4 million years of evolution & civilization.