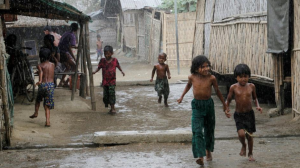 In October 2015, researchers from the International State Crime Initiative (ISCI) based at Queen Mary U. of London issued a report titled “Countdown to Annihilation: Genocide in Myanmar,” documenting that Rohingya in Myanmar “face mass annihilation & are in the final stages of a genocidal process” conducted by the government.

When Aung Sang Suu Kyi was elected as State Counsellor in March 2016, she became the front office for the military junta who remain committed to the genocide of Rohingya. Rohingya have been persecuted for decades but the 2012 massive wave of violence against them & the May 2015 refugee crisis in the Andaman Sea finally made the world notice the persecution of Rohingya.

Starting (at least publicly) in 2011, Obama, Hillary Clinton, European Union officials, Christine Lagarde of the IMF were part of opening up Myanmar to foreign investment by making pilgrimages to Suu Kyi (recently released from house arrest) & likely holding secret negotiations with the junta in a campaign to remove the stigma of Rohingya genocide.

For 24 years, the EU had introduced a resolution to the UN General Assembly condemning human rights violations in Myanmar. The US has imposed sanctions since 1997 which Obama began to suspend piecemeal starting in 2012. In August 2012, the Organization of Islamic Cooperation (OIC) condemned the genocide & promised to bring a resolution to the UN General Assembly (UNGA) that October. The OIC is an alliance of 57 countries that claim to speak for the “Muslim world.” There is no indication the OIC has ever brought a resolution on genocide in Myanmar to the UNGA but in July 2015 they got one passed at the UN Human Rights Council in Geneva. It was anticipated by Myanmar that they would present one to the September 2016 UNGA.

On August 23rd, 2016, the Myanmar government announced the formation of a nine-member advisory commission headed by Kofi Annan, a former UN Secretary General & 2001 Nobel Peace Prize winner. The Annan Commission was tasked with “conflict resolution, humanitarian assistance, reconciliation & development” in Arakan state & was given one year to research & make recommendations to the government.

Several human rights groups were jubilant, including the ISCI & Amnesty International, believing that Suu Kyi was addressing the genocide of Rohingya. But they should have taken a closer look at the other members of the commission: a former adviser to Annan from Lebanon; a Dutch diplomat formerly involved in a UN program on HIV/AIDS; two Arakan Buddhists; two Muslims, neither of them Rohingya; & two government representatives. The composition of the commission has ‘snow job’ written all over it.

The commission convened in Rangoon (Yangon) on Monday, September 5th with speeches by Annan & Suu Kyi. On Tuesday & Wednesday, Annan took his entourage to Arakan state where they were met by protesting Buddhist nationalists & where he claimed he met with Muslim religious leaders, Buddhist monks, civil society organizations, internally displaced persons, & state politicians. The commission was back in Rangoon by Wednesday evening.

On Thursday, Annan held a press conference where only ten questions were allowed from among hundreds of international reporters. One reporter asked “Did any of you witness anything you would describe as oppression?” Annan answered, “Personally, I did not see it there.” That would mean that whichever “internally displaced persons” he spoke with in Arakan were not in one of the 40 concentration camps where Rohingya are forcibly confined in squalid conditions.

Then Annan told reporters, “We are not here to do a human rights investigation or to write a human rights report”…but to write an “impartial report” of recommendations “to reduce tension & support development” in Arakan state. He insisted the commission would work rigorously, impartially, independently–& should have added to blow smoke up your rumps.

When researchers in October 2015 documented that Rohingya in Myanmar “face mass annihilation & are in the final stages of a genocidal process,” how is that in September 2016 our man Annan didn’t see a damn thing wrong? Corruption so profound, so stupid & contemptible must have cost Suu Kyi & the generals a fortune to buy.

The only reason that commission was convened & that Annan was chosen to head it was to grease the wheels of diplomacy for Suu Kyi heading into the September 2016 UN General Assembly & to provide cover for Rohingya genocide.

This month eleven political parties, including Buddhist nationalists, called for the dissolution of the Annan Commission. In its defense, Suu Kyi could point to the fact that for the first time in 25 years, the EU did not make a resolution at the UNGA & that the OIC withheld its resolution condemning Rohingya genocide. She could proudly point to the fact that after her September 14th meeting with Obama, he signed an executive order terminating all sanctions against Myanmar for human rights crimes.

Photo is Rohingya in one of the 40 concentration camps in Arakan state.