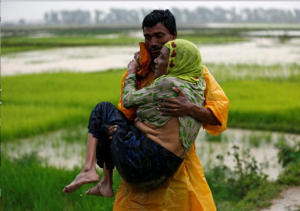 Media identified this fellow as “a local man” helping an elderly Rohingya woman no longer able to walk after crossing the border. They don’t say if he’s a local Rohingya man from the nearby refugee camps or a Bangladeshi volunteer. It doesn’t matter. He’s a stranger stopping to help someone in desperate need. Deepest respect to those who respect other human beings without asking for their papers, to whom no human being is alien.

Stand with the Rohingya against genocide & in their struggle for human, democratic, civil, & refugee rights.