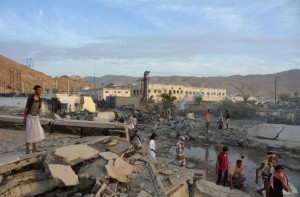 The killing fields of the Middle East, from Yemen to Iraq to Syria to Gaza–& onwards if the military domination of the region is not stopped by massive international antiwar pressure:

This photo is identified as “the al Qaeda-held port of Mukalla city in southern Yemen.” According to media reports, most of which come straight out of the US Pentagon PR office, Mukalla was taken over by al-Qaeda in the Arabian Peninsula (AQAP) in April 2015.

The US has been drone bombing in Yemen since after the 9/11 bombing of the World Trade Center in 2001. It’s hard to imagine there’s anything left of AQAP but if there is bombing them to smithereens is obviously a failed military strategy. The Pentagon claims it takes out al-Qaeda fighters in these bombings but not a word of what Pentagon officials say about Yemen (or anything else) can be trusted. The greater likelihood is that Yemeni civilians, like the wedding party bombed to death in 2013, are the primary victims–& maybe intended targets.

In this current carpet bombing siege, now over one-year long, concern for civilians is not an issue–or they wouldn’t be bombing everything in sight. It’s that old “collateral damage” thing. To paraphrase war-monger Hillary Clinton, ‘the US (& its allies) came, they saw, they killed.’

Our fullest solidarity with the people of Yemen & our deepest regrets the antiwar movement is still too weak to stay the hand of militarism in the Middle East.