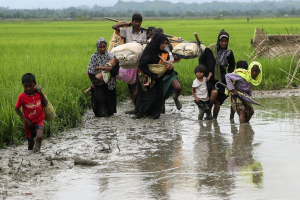 The well-known Burmese news site Irrawaddy has been cheering on the Rohingya genocide in the most politically corrupt ways: (1) the “there’s two sides to this genocide” argument; (2) the ARSA terrorists provoked the military into scorched earth genocide argument; (3) the Aung San Suu Kyi remains the best hope of peace & reconciliation crap; (4) & by dragging out activists from the 1988 social uprising (those not in jail, executed, or in exile) who all look like whipped puppies to swear allegiance to the military & Suu Kyi & say the conflict has to do with immigration & “Bengali” terrorism. One of them said “They [self-identifying Rohingya] are not one of 135 ethnic groups in Myanmar.”

But how does Irrawaddy explain these images of entire families fleeing, people carrying injured & elderly on their backs, injured crawling to asylum on their knees, unaccompanied children running for their lives with baby siblings? How do they explain entire villages torched or the stories by refugees of men, women, & children burned alive, raped, beheaded, stabbed, tortured?
(Photo from Getty)