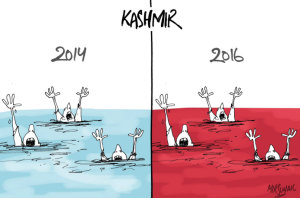 This brilliant cartoon speaks for itself but for those who don’t know, the reference to the 2014 flood in Kashmir is because (exactly like Bush’s week-long delay in sending half-assed relief to Black residents in Hurricane Katrina) the Indian occupying army took several days to rescue & evacuate Kashmiris. Several hundred died, thousands were left homeless.