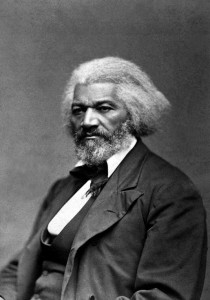 Frederick Douglass is one of the most outstanding & inspiring figures in US history. An escaped slave who became a leader of the abolitionist movement, writer & orator, he was committed to Black, women’s, Native American, & immigrant rights. He said “I would unite with anybody to do right & with nobody to do wrong.”
He traveled & lectured in Ireland & Britain, including during the Irish “potato famine” (actually a genocide), & collaborated with abolitionists & freedom fighters in both countries.

In the 1872 elections, he ran as vice president with presidential candidate Victoria Woodhull for the People’s (Equal Rights) Party. He’s one of those political leaders & fighters that we can learn the most from theoretically & in practical movement building.

The memory of this remarkable man & his contributions cannot be debased by the idiocies & racism of Trump. In an era when so many have lost their way in cynicism & misanthropy, Frederick Douglass stands as one of our great teachers, a man whose vision of social transformation & dignity of character show us what is required of activists. No attitude, no chip on the shoulder toward others, no disdain or contempt for any, but steadfast determination to do right not for the human race but with us.

We should aspire to follow in his footsteps fighting for the same things & honor him as teacher.