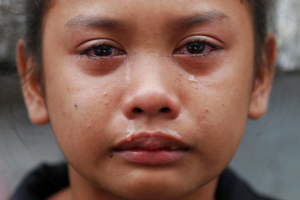 Manila is one of the fastest growing cities in the world because of the scorched earth nature of neoliberal economics which has dispossessed & forced hundreds of thousands of rural people into urban slums.

Now the Philippines are on a massive privatization campaign in Manila & are forcing slum dwellers to live on the streets or relocate back to rural areas with no employment possibilities. In Manila many of them work the landfill sites as scavengers, in the informal economy, or in low-paid jobs. Those are the people that Duterte is targeting in his vigilante anti-drug campaign, which is really a war on the poor.

There are many gruesome photos from Rodrigo Duterte’s vigilante war but this one is powerful because it is repeated for every person gunned down: the grieving of the survivors. This is 12-year-old Kasandra Kate crying at the funeral of her father, Verigilio Mirano, at a public cemetery in Manila. He was killed by a vigilante gunman at his home on September 27th. According to a family member, he had stopped using drugs after Duterte became president in June.

Whether he was or was not a drug user is not the issue here. Drug addiction is a public health matter & a social problem, not a criminal matter. And even if it were a criminal matter, due process is required, not summary execution.

Our condolences to the families who have lost their beloved. May the victims Rest In Peace.