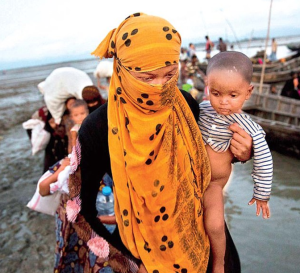 Indian nationalists have gotten so much mileage out of the narrative of a Kashmiri Pandit (Hindu) genocide & forced migration in 1989 that they’re now using it against Rohingya Muslims in Arakan state. According to India Today & repeated by Reuters, the Daily Mail, & other media, masked men dressed in black presumed to be Rohingya are executing Hindus & burying them in mass graves, marching the women into the woods, removing their sindoor & bangles, forcing them to wear burqas & convert to Islam, then forcing them to marry Rohingya Muslims. All that while Rohingya are running from military & nationalist death squads. They’re taking time out from genocide to force Hindus to convert.

Even after Burmese Hindus flee to Bangladesh refugee camps, India Today & the Daily Mail claim Rohingya Muslim overseers keep them under close supervision to enforce the religious conversion–while at the same time standing in line for food, trying to get medical care for their infirm & injured, & trying to build shelters with tarps against the monsoon rains.

This is where Islamophobia shades into derangement. Burmese dissident in exile Maung Zarni said that “What is really scary is the Burmese military’s attempt to expand the circle of enemies against the Rohingya.” That’s exactly what’s going on here. That circle of enemies now includes Hindutva nationalists, fascists & Assad supporters, Bangladeshi officials, other government officials, & several media sources. But just as the circle of lies & enemies expands, so does the breadth of solidarity which can see through the idiocy & malignancy of these lies to stand with the Rohingya all over the world. When you recycle slanders used against Kashmiris for use against Rohingya, chickens can come home to roost. But the worst part of this is that the junta is given impunity for executing Hindus & blaming it on Rohingya.

Photo is Rohingya refugee arriving in Bangladesh. But is she really a Rohingya or a Hindu forced to convert?