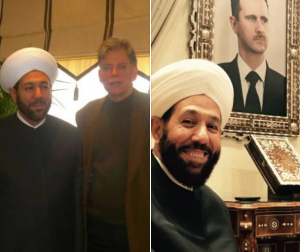 On the left is a photo of Grand Mufti Hassoun with former KKK official David Duke who just officiated at the white supremacist rally in Charlottesville. The photo was posted on Duke’s official website on December 3, 2005, six years before the Syrian revolution erupted as part of the Arab Spring uprisings. But Duke has made other trips to Syria after the revolution, including in the fall of 2016 where he again met with the Grand Mufti. On both occasions, according to Duke’s blog reports, the issue of Jews & Israel were foremost in their discussions–not because they both support Palestinians but because they are profoundly hateful toward Jews. Under the dictatorial regime of Hafez Assad, father of Bashar, Jews were persecuted & eventually most chose or were forced to leave Syria. During his trip last year, Duke said he learned that “Zionist Jews” just love “jihadists” of the most murderous kind, like ISIS.

On the right is a photo from Vanessa Beeley’s Facebook wall of May 10, 2017 where she comments: “Grand Mufti Hassoun, one of the greatest living peace makers on this Earth. I am proud & blessed to be called his “sister”, we are all family…”. Since Beeley frequently reports on her involvement with European fascist groups, it comes as no surprise that she & David Duke have found common cause with the Assad regime, including with one of its executioners. But it would be interesting to know what kind of political associations Beeley has with Duke. Would that finally snap some of the credulous regime-change advocates out of their reveries about the character of revolution & counter-revolution in Syria?