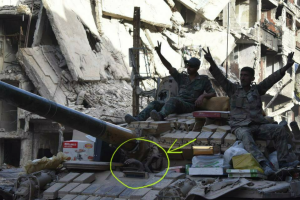 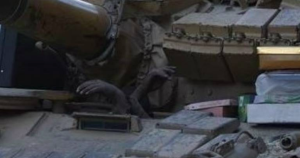 This photo was published on a pro-Assad website as a triumphal image of Syrian troops taking over Yarmouk Palestinian refugee camp south of Damascus. Those who took the photo & posted it must not have noticed the hands raised out of the cabin of the tank. It wasn’t posted long before the cartoonist from Yarmouk known as “Hani Abbas” noticed the two hands & was horrified. The photo was deleted from the website after many began questioning the hands. There’s no information about who the body belonged to because, according to the Yarmouk News website, all information coming out of the camp is controlled by the Assad regime & its loyal factions.

Yarmouk is now referred to by activists as ‘Death Camp’ because a number of bodies have been found under the rubble even though there are no search & rescue operations. The brave & glorious Syrian army is engaged in widespread looting & the destruction of Palestinian homes.