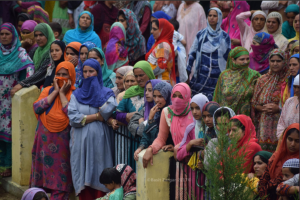 We should never forget there was a media blackout about the occupation of Kashmir until Kashmiri activists on social media obligated media to begin reporting in order to establish a counter-narrative to that of a freedom struggle against occupation. Before the 2016 uprising & military siege in Kashmir, photojournalism was mostly Kashmiri women’s prayer rituals, snow-covered trees, flower patches & serene images of Dal Lake. Then in 2016, borrowing from coverage of Palestinian Intifada, media began using photos of the lone stone pelter, as though they were antisocial hooligans isolated from mass resistance & the thousands of protesters they defended.

It is once again on social media where we learn about the character of the ongoing occupation & where we see that, like in Palestine, the most pervasive image of occupation–after that of resistance–is of funeral corteges/protests where they grieve & bury young martyrs & protest the occupation at the same time.