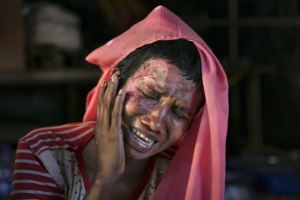 This is 30-year-old Mumtaz Begum, a Rohingya woman suffering physical & psychological trauma from Burmese soldiers raping her & then torching her home. Estimates of the number of Rohingya refugees range between 650,000 to nearly one million. All of them are suffering extreme trauma from the genocidal assault seeing loved ones & neighbors executed in the most unspeakable ways, being raped or witnessing women & children raped, human rights crimes & terror beyond imagination. So when Bangladesh, the UN, & other countries approve the Burmese/Bangladeshi scheme to forcibly repatriate Rohingya refugees to concentration camps under guard by the Burmese military, they are willingly, knowingly sending traumatized Rohingya back so that the generals & Suu Kyi can finish off the dirty work of genocide. No one is unclear about that.

We cannot cease advocating for Rohingya refugee rights. It is a fight that will significantly strengthen the essential international struggle for immigrant & refugee rights from the southern border of the US to the western borders of Europe to the Mediterranean to the borders of Australia.

There can be no decisions about repatriating the Rohingya refugees to Burma without their direct participation in every decision made about their fate.