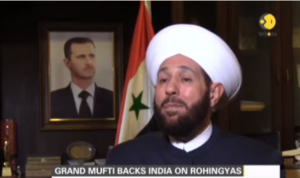 Ahmad Hassoun, the chief hangman & Grand Mufti of Syria came out on Indian TV in support for the Burmese junta, in support of India’s attempt to deport 40,000 Rohingya refugees who the Modi government associates as terrorists, & suggesting that media coverage of the genocide exaggerates the problem.

Is it possible or likely that a mufti who supports fascism & genocide in Burma, the occupation of Kashmir, & the persecution of Muslims in India would represent some kind of sui generis righteous fascism in Syria? Or that the 13,000 political prisoners in Syria who he signed off for torture & hanging actually deserved it? Only in Assadist LaLaLand is that possible.