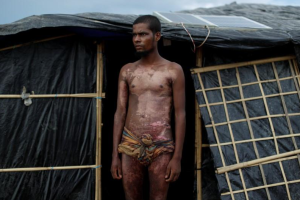 This is 21-year-old Mohamed Jabair at a refugee camp in Cox’s Bazar, Bangladesh posing to show burn injuries he sustained when his house in Arakan state was torched. He was knocked unconscious & blinded for several weeks by the explosion & only survived because his brother & others carried him for four days to reach asylum in Bangladesh. The money sent by relatives in Malaysia has run out & he can no longer afford treatment for his burns.

Now the question is: what the hell are the UN & other humanitarian aid groups doing in the refugee camps if they can’t provide necessary free medical services, clean water, port-a-potties? According to volunteer doctors doing rotations in the camps, the conditions are absolutely deplorable. There are thousands of sick people with contagious diseases, infections, broken limbs, burn injuries, bullet wounds, knife & machete cuts. If the established organizations do not have the resources to handle the magnitude of need, they cannot remain silent but must demand in stentorian voices that all governments, especially those with investments in Burma, provide massive, immediate, emergency aid. Without health care, clean water, & sufficient sanitation facilities in the camps, a cholera epidemic is only a matter of time.

There are governments directly collusive in the genocide by selling Burma arms (China, Russia, India, Israel, & others). Other governments, including the US, Canada, the EU, Japan, Vietnam who invest in Burma, are directly implicated by refusing to impose sanctions on Burma. It is long past the time for diplomatic civilities & deceits when the Burmese military is engaged in carrying out the final solution.