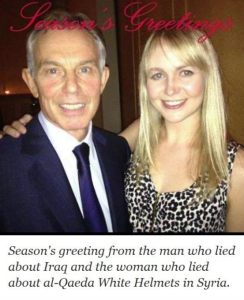 The Assad school of falsification:

This photo of war criminal Tony Blair & journalist Olivia Solon is from the Assadist school of falsification. Solon is the investigative journalist who wrote the Guardian exposé titled “How Syria’s White Helmets became victims of an online propaganda machine” which shows how Eva Bartlett, Vanessa Beeley, & Tim Anderson worked with the Syrian & Russian regimes to vilify the White Helmet rescue workers. “It’s like a factory”, Solon reported.

Although she has an impressive résumé of investigative work, Assad supporters led by Bartlett & Beeley have employed misogyny against Solon by attempting to make her appear frivolous & insubstantial as a journalist. Because they’re professional propagandists, they have no ethical parameters to restrict their calumnies. Not even against small children.

This is a photoshop job & easily identified as such. Unless Solon has a triple-jointed right arm. Because it’s so obvious, Bartlett was asked when she posted this if it was real & she glibly responded “could be.”