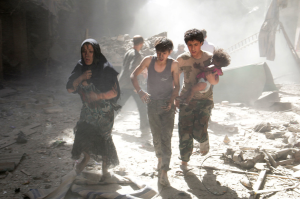 The anti-Trump protests are not a post-election phenomenon. Thousands have protested Trump in hundreds of rallies since June 2015 when he announced his candidacy. Since the election, there have been hundreds of protests & thousands of participants, overwhelmingly college & high school students, in dozens of US cities & around the world.

The thrust of the protests is against the rightward shift in politics & the placards focus on the social issues: Black & Latino rights, women’s rights, against the DAPL pipeline, LGBT rights, immigration rights, targeting Muslims.

What is not apparent in the protests is antiwar opposition. When there are several US wars going on that’s a real problem. But if you think it’s a problem among youth, you should take a look at what a catastrophic mess the antiwar movement is among longtime activists. The most distressing aspect is political disunity because many activists oppose only US intervention & support the Syrian & Russian bombing of civilians. Many are expressing exuberance at the bombing rampage against Aleppo going on now.

This photo of civilians, one carrying a wounded infant, is not from the current assault on Aleppo but from a barrel bomb attack in June 2014. They have sustained this kind of barbarism for over five years whilst antiwar forces denounce them as “jihadists.”

Principled antiwar activists demand: the immediate cessation of Syrian & Russian bombing of civilians; the immediate, unconditional withdrawal from Syria of all foreign military forces, undercover operatives, & mercenaries. Get the hell out now!