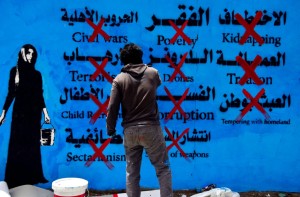 Before the Arab uprising in Yemen all the news from the country was about US drone bombing to rout Al-Qaeda in the Arabian Peninsula (AQAP). Sometimes the reports were indistinguishable from farce–like AQAP & the underwear bomber or bombs planted in ink toner cartridges. When the tsunami of protest erupted in early 2011 we were witnesses to an extraordinary historical event. The threat of US military intervention did not daunt the spirit of rebellion to US-backed tyranny.

When the uprising ended in 2012 with the power elite playing musical chairs but without changing the status quo (including collusion with the US military), the only documentation of that momentous struggle was graffiti art & photo montages of those killed or disappeared by the regime.

There has been almost no news coming out of Yemen since except for scattered reports over the past year of “micro Arab Springs” & labor strikes especially among healthcare workers & despite draconian anti-labor laws. That’s interesting because healthcare workers played a prominent part in the Yemen uprising.

There must be something of political consequence going on that media has not felt compelled to report. Because in response to what is called (without elaboration) “the current political upheaval in Yemen,” artist Murad Sobay put out a call on social media for a graffiti campaign to address the US drone war, corruption, sectarian conflict, poverty, terrorism, civil wars, child labor, proliferation of weapons, kidnapping, & the continuing disappearances of activists.

Revolutions take a lot out of people, especially if they have not been successfully concluded & nothing has changed or may have gotten worse. But they also transform people–in ways that will not be reversed. They are moments in time when millions learn & unlearn & commit themselves to social transformation–even in the apparent lulls. It can be said with assurance that, whatever the odds, the revolution against tyranny in Yemen has just begun.

This is one of the graffiti murals in Sana’a, Yemen.